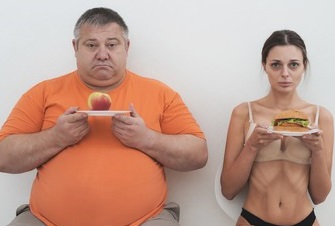 The common assumption is that obesity is the most common eating problem, but eating disorders like anorexia nervosa and bulimia are the main culprit. This involves a desire not to gain weight. These disorders have a drastic effect on our lifestyle and health.

Bulimia is an eating disorder characterized by recurrent episodes of binge eating (rapid consumption of a large amount of food in a discrete period of time coupled with a sense of lack of control), followed by attempts to purge the excess by means of vomiting, laxative use, or fasting and excessive exercise.

A person suffering from bulimia eats more and more without control and later he/she realized excess consumption and tries to exert/vomit food by means of vomiting and fasting.

The binges can be frequent and extreme. A survey of bulimic women found that most women binged at least once per day and consumed more than 4800 calories (often sweet or salty carbohydrates foods).

However, because of the purges that follow the binges, a bulimic person’s weight may stay relatively normal, which allows bulimics to keep their eating disorder hidden. But this behavior can have a high physiological cost.

Vomiting can disrupt the balance of potassium in the body, which can result in problems like dehydration, and urinary infections. Bulimia primarily afflicts young women. But bulimia is somewhat more frequent than other disorders.

Many factors contribute together for any individual to develop an eating disorder. These may include a combination of social, biological, and personality or family factors.

Anorexia nervosa is an eating disorder characterized by extreme, self-imposed weight loss, such that an individual weighs less than 85 percent of his/her expected minimum normal weight. Some anorexics weigh less than their normal weight, sometimes more than 50 percent.

People see them as overweight despite the extreme loss of weight and the resulting problems, the typical anorexic denies that there is a problem and refuses to gain weight. Anorexics people think that have gained too fat.

Anorexics achieve and maintain they are pathologically low body weights either by restricting their caloric intake or by also binge-eating followed by purging, by means of self-induced vomiting, or the misuse of laxatives.

For females to be diagnosed as anorexic, in addition to the weight loss, they must also have stopped menstruating. Weight loss can lead to a number of dangerous side effects, including emaciation, susceptibility to infection, and other symptoms of undernourishment. These side effects can lead to death.

Sometimes this concern reaches the point of obsession, as when one is anorexic. The obsession with food and possible weight gains leads some anorexics to become compulsive exercisers as well, sometimes exercising vigorously for several hours a day.

What Eating disorder is most common?

Anorexia is relatively more common. Its prevalence across Western Europe and the USA is about 0.3 percent: However, this represents more than a doubling since the 1950s, although the frequency seems to have stabilized since the 1970s.

Anorexia is 20 times more likely to occur in women than in men, and the majority of anorexics are young women between their teens and their thirties. Typically, anorexics are entirely focused on food, carefully calculating the number of calories in anything they might consume.

Is eating disorder an addiction?

People who have unhealthy relationships with food may develop eating disorders later in their life. Obsession with food, unsatisfied body weight, and the consciousness of body shape is some of the signals for eating disorders. Addiction refers to the tendency of a person not to control urges or wishes.

When a person is completely dependent on something, he or she can be classified as an addict. But eating disorders are an obsession, a person wants to satisfy his obsession with food. Eating disorders can also lead to depression in some cases.

Three main causes of eating disorders are identified by psychologists. They are biological, sociocultural, and family genetic causes.

Clearly, though, not everyone who is exposed to cultural messages of sexual objectification develops an eating disorder. Certain biological vulnerabilities may increase the tendency to develop eating disorders.

With regard to bulimia, there may be a deficiency in the neurotransmitter serotonin which plays a role in both appetites or in executive functioning and affects decision-making and impulse control.

Many social and cultural factors play major roles in eating disorders. The incidence of eating disorders has also increased in the past 50 years due to shifts in the ideal image/body and the role of media. The ideal image of women in the year 1950, and now is completely changed.

It can lead to a form of self-Consciousness characterized by vigilant monitoring of the body’s outward appearance. This preoccupation with appearance has been shown to disrupt a person’s stream of consciousness and thereby limit the mental resources that she can devote to other activities.

Personality and family factors may also play a role in anorexia and bulimia. Many young women with eating disorders come from families that demand ‘perfection’ and extreme self-control but do not allow expressions of warmth or conflict.

Some young women may seek to gain some control over, and expressions of concern from, their parents by controlling their eating habits, eventually developing anorexia. Others may turn to binge-eating when they feel emotionally upset or are painfully aware of their low self-esteem.

Therapies designed to help people with eating disorders regain healthy eating habits and deal with the emotional issues they face have proven useful. Drugs that regulate serotonin levels can also be helpful, particularly for people with bulimia.

Eating disorders are behavioral disorders which means they can arise from faulty behavior patterns and can be unlearnt by changing behavior.