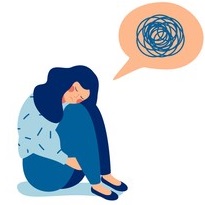 Depression is a common term nowadays.  We observe around us many people complaining that they are depressed for a long time. But one question arises Am I really suffering from depression or it is my overestimation?

Am I Really DEPRESSED?

OR it is my overestimation?

First of all, we should understand what is

Real depression and what is widely Said Depression.

We experience stress every single day i.e personal relations, job, salary, work. These stressors can lead to pain, fluctuating emotional well-being, and mood disturbance. But these things are part and parcel of human life, we are born to fight and we continuously mold our outside environment according to our needs.

No single day is the same as other and daily ups and down is common. But we mistakenly named these downs as depression.

What actually, Depression is:-

Depression is a mood disorder that is characterized by disturbance in mood. Most of us have time when we feel sad, uninterested in activities, mild depressive symptoms are a normal response to many life stressors. Depression becomes a disorder when the symptoms become so severe and interfere with the normal functioning of life.

What is the reliable symptom of Depression?

There is not any single cause of this. The diagnostic and statistical manual of mental disorders (DSM) is the standard classification of all mental disorders published by the American Psychiatric Association after extensive research and discussion. According to this if a person has the following at least five symptoms then he/she may be depressed.

2.     Not sleeping well or sleeping too much

4.     Feeling hopeless and guilty about the act

The minimum duration of symptoms:-

And what we generally Do ………

We named our own mood depression. If anyone feeling depressive symptoms for more than 14 days then it is recommended to consult a doctor. Normal rise and fall are common and we should not feel that we are depressed, the way we think affect our body and we may go toward depression. I want to explain the phenomenon this by placebo effect:

Expectations play an important role in our bodies. An upcoming pleasurable event like a holiday, picnic, marriage boosts our mental health and happiness. In the same way, a negative thought makes us sad. In a study, two groups (A, B) of students were divided into 50 -50 students each group. A group is given an energy drink and B group is given simple water but they are both told that they have been given energy drinks.

The first-day running competition is organized and their data recorded. The next day group A is given simple water and group B is given an energy drink and in the same way after running completion their data is recorded. It is found that the performance of both groups remains the same no matter they receive energy drinks or not. This experiment illustrates that our maximum potential lies within us only. The way we perceive we are makes us the same.

Normal life functioning brings challenges in our life, these challenges put extreme pressure on us forced us to down but once we overcome these, we learn and strengthen ourselves. Whenever we are on the downside, feeling sad, instead of labeling our mood as depression we should try to overcome this condition as soon as possible.