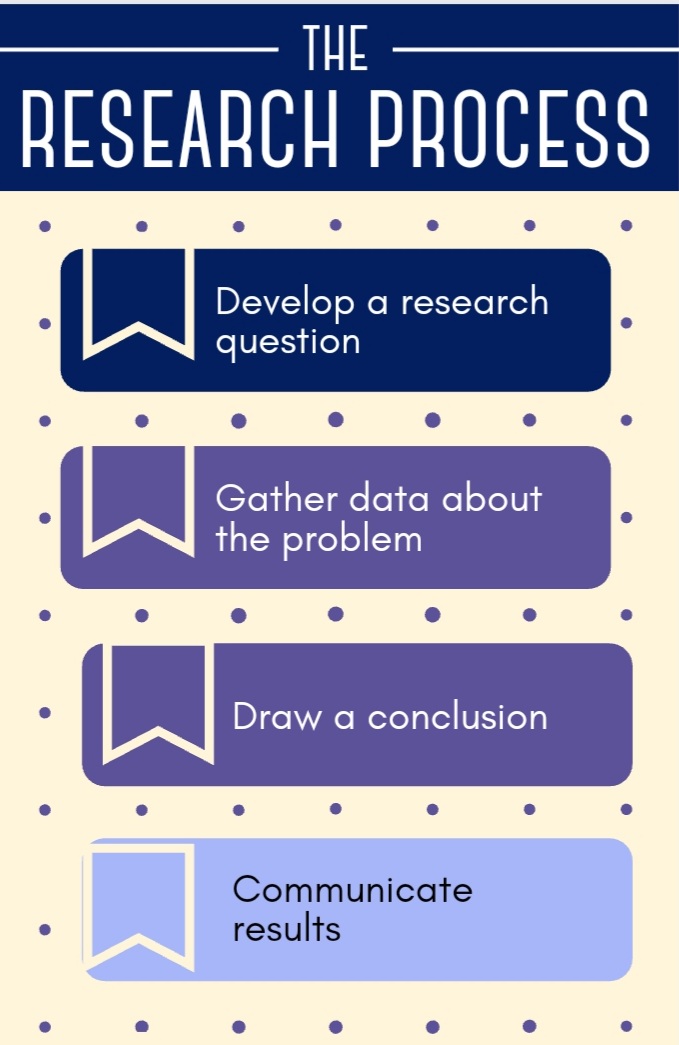 For instance, if you and your friend measure the tie length of a table using the same measuring device, it is likely that both of you would arrive at the same conclusion about its length.

The second characteristic of scientific research is that it follows a systematic procedure or steps of investigation. It includes the following steps: conceptualization of a problem, collection of data, drawing conclusions, and revising research conclusions.

1 Identification of a Problem:

The process of scientific research begins when a researcher selects a theme or topic for study and further narrows and develops specific research questions. This is done on the basis of a review of past research, and observations. and personal experiences. For example, a researcher was interested in observing the study habits of students.

First, he will select habits then outdoor habits then particular habits. In Psychology, we study a diverse range of problems related to behavior and try to understand our own behavior after identification of the problem, the researcher proceeds by developing a tentative answer to the problem. which is called a hypothesis.

For example, based on the earlier evidence or your observation. you might develop a hypothesis ‘greater is the amount of time spent by children in viewing violence

The second step in scientific research is to collect data. Data collection requires developing a research design or a blueprint of the entire study. if requires making decisions about the following four aspects: (a) participants in the study, (b) methods of data collection. (c) tools to be used in research. and (d) procedure for data collection.

Depending upon the nature of the study, the researcher has to decide who would be the participants (or informants) in the study. The participants could be children, adolescents, college students, teachers, managers, clinical patients, industrial workers, or any group of individuals in whom/ where the phenomenon under investigation is prevalent.

The second decision is related to the use of methods of data collection, such as observation method, experimental method, correlaüonal method, case study, etc. The researcher needs to decide on appropriate tools (for example, interview schedule, observation schedule, questionnaire, etc.) for data collection. The researcher also decides how the tools need to be administered to collect data (i.e. individual or group). This is followed by an actual collection of data.

The next step is to analyze data to understand what the data means. Various statistical methods were used to find out what data means.

A scientist presents an article to a diary. The decision of the diary is not entirely set in stone by the diary’s crowd or eminence. The diary chooses at least two proper specialists (clinicians working in a comparative field) to peer survey the article without installment.

The companion commentators survey the strategies and plans utilized, the inventiveness of the discoveries, the legitimacy of the first examination discoveries, and their substance, construction, and language.

Input from the analyst decides if the article is acknowledged. The article might be: Accepted for what it’s worth, acknowledged with amendments, sent back to the writer to modify, and once again submit or dismissed without the chance of accommodation.

The proofreader pursues the last choice of whether to acknowledge or dismiss the exploration report in view of the commentator’s remarks/proposals. Peer survey is significant in light of the fact that it keep flawed information from entering the public space, it gives an approach to really taking a look at the legitimacy of discoveries and the nature of the system and is utilized to evaluate the exploration rating of college divisions.

Peer surveys might be ideal, while practically speaking there are heaps of issues. For instance, it dials distribution back and may forestall uncommon, new work being distributed. A commentator could involve it as a chance to keep contending scientists from distributing work.

The appearance of the web implies that a ton of examination and the scholarly remark is being distributed without true friend surveys than previously, however frameworks are developing on the web where everybody truly gets an opportunity to express their impressions and police the nature of exploration.