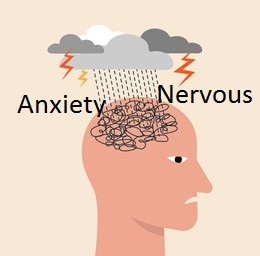 A lot of people feel nervous or anxious in many situations. It can be difficult to ascertain the difference between Anxiety vs Nervousness. In this article, we talked about what nervousness is, what anxiety is, and how it can impact your life.

Perhaps you’ve heard someone say, “I’m so nervous.” Or perhaps you’ve said it yourself. That sensation of butterflies in your stomach, sweaty palms, and tense muscles. But is there a difference between nervousness and anxiety?

We can all get the jitters before an exam or a job interview, but if that feeling continues after the event, if it’s interfering with your daily life or making you miserable, then it’s time to reach out for help. Let’s take a look at some of the differences between feeling nervous and feeling anxious.

Nervousness is an unpleasant physical sensation that often includes a racing heart, sweaty palms, and tense muscles. Typically, you feel this before an event, such as a job interview or a presentation.

There are two types of nervousness: state and trait.

State nervousness occurs when someone anticipates an event such as a job interview and the feelings come and go naturally. Trait nervousness is more long-term; you have chronic feelings of uneasiness or worry.

Anxiety can be hard to understand because it’s different for everyone. It’s a feeling of uneasiness that can have a variety of triggers, such as being in an unfamiliar environment or speaking in public.

It can feel like something is physically wrong with your body and it often includes physical symptoms, such as chest pain, difficulty breathing, dizziness, or muscle tension.

Nervousness is more commonplace and typically doesn’t last very long. It may feel like you’re walking on eggshells while you wait for the other shoe to drop; you don’t know what’s going to happen next and all you want to do is get out of there now. Anxiety on the other hand may make you feel nauseated, sweaty, and shaky.

Generally speaking, people who experience anxiety will find it difficult to cope with their feelings alone so professional help should be sought when necessary. Though many people experience these feelings for short periods of time, some experience them chronically which can lead to mental health issues like depression or drug abuse problems as coping mechanisms.

Things to Consider When Determining Whether You’re Anxious or Nervous

Anxiety vs Nervousness can be two different things. Anxiety is an emotion that is characterized by feelings of worry, fear, or unease about the future. You may feel like you’re in danger during times of anxiety.

This can cause physical symptoms, such as a racing heart and tight chest, as well as mental and emotional symptoms. Nervousness, on the other hand, is characterized by feelings of apprehension or concern.

If you’re feeling nervous before an event or activity that you have to do, it means you’re apprehensive and worried about how it will turn out.

How Anxiety and Nervousness Impact Your Life

Anxiety is a feeling of apprehension and discomfort. It is characterized by physical symptoms such as sweating, heart palpitations, and stomach pains. Sometimes, people with anxiety may also experience panic attacks or obsessive thoughts about the consequences of their actions.

Nervousness is just a feeling. It’s not an illness, so it doesn’t have any physical symptoms as anxiety does. The nervousness that people feel before an event usually goes away soon after the event has passed.

What’s the Difference Between Anxiety vs Nervousness?

One major difference between anxiety and nervousness is that people who are anxious often need to take precautions before entering into a stressful situation.

They might refuse to go near an animal because they’re afraid they’ll panic and injure themselves. People who are just nervous will avoid these situations but not be fearful about them when they find themselves in one.

Nervousness is a feeling of apprehension or excitement caused by an event or circumstance. It can also be the anticipation of a future event.

Anxiety is a feeling of worry, fear, and unease that occurs when you’re anticipating something or when you’re in unfamiliar situations. It’s often accompanied by physical sensations like dizziness, nausea, sweating, and shakiness.

Nervousness and anxiety can be difficult to distinguish. Nervousness is a feeling of uncertainty or fear. It’s often a response to something that is happening in the present.

Anxiety is a feeling of worry or fear, but it’s usually related to a future event. To determine whether you’re experiencing one or the other, think about how each emotion makes you feel and what is making you feel that way.

If you find that you’re more nervous than anxious, consider what’s happening in your life that’s causing you to feel this way. Perhaps you’re about to have an important meeting or an interview? If it seems like your feeling is more related to future events, you may be experiencing anxiety.

Why Anxiety is developed in humans?

Our primary biology evolved from the caveman era. Caveman people spend a lot of time in the cave, to the tribe, to the group because that’s where they found security. In the evening caveman return to the cave because the caveman doesn’t have very good sensory systems for dealing with the dark.

Those are times when our body worries about doing things like taking the nutrients giving our body everything it needs to be physically strong. So basically digestion processes are aimed at long-term survival, so that we can survive for a good period of years into the future.

Cavemen were literally gathering berries, gathering food, and hunting. But suppose suddenly some animal came and life is in danger. A different part of our machinery is the sympathetic nervous system activated and energizes us for short-term survival.