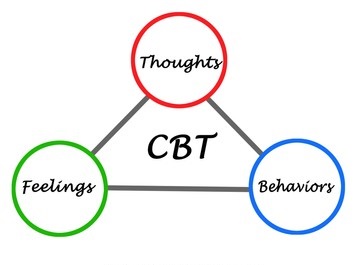 What is cognitive behaviour therapy?

Why we need CBT?

The insight therapies kind of fit our stereotype of somebody laying back on a couch and talking and working through issues and perhaps trying to get at underlying psychological problems.

Cognitive Behavior Therapy, or CBT. It’s in fact a very dominant form of therapy. If we think about depression for a moment and imagine negative events happening in a person’s life, when something negative happens, there are sometimes rational beliefs about why that negative thing happened.

Teaching people their irrational beliefs. Making them see the irrational beliefs they have. And trying to change those for much more useful cognitions that help them think about the world differently and ultimately do better. Psychoanalysis had the notion that the symptoms arise from some inner problem.

Suppose a boy (John) was with a group of friends and they are going to a party.  On the way John lashed out at somebody negatively, he said something nasty about them. And then he noticed his friends looking like they didn’t really like what John said and behaved.

So this could be a rational belief, John reacted too strongly and, this is like a sort of healthy, negative emotion. John needs to literally modify his behavior because that was too rude, too sharp.

We all have irrational beliefs that make us over attribute to the wrong sources so some negative event happens. Imagine John is at a party and he is sitting there and then the police come somehow and his friends get in trouble.

John thought that’s happened because of him. There’s something he can do, he thought he shouldn’t have gone to that party that somehow wherever he goes bad things happen. John thinks negativity follows me everywhere that negative event was due to my presence. That’s an irrational belief.

Chances are unless you actually did something to bring the police to the party it was just chance. But some people especially people with depression show a lot of persistent irrational beliefs. They over attribute negative events to their behavior and themselves. That makes them feel really bad and it reinforces the negative events.

What is cognitive behavioral therapy for depression?

The above cognitive behaviour therapy examples, represents the mental state of John. Depressed people think any bad event happened because of me, I never do anything right, I’m useless. This perception makes them feel sad, terrible, tired and they can’t concentrate very well.

Depressed people try to avoid society and people, stay in bed resulting in reduced activities. Every negative life event that happens, they attribute it to their own worthlessness, then they can keep this cycle going and going and going.

These negative events just add fuel to these thoughts which are connected to behaviors. If we could somehow get the client to realize and properly think about the negative events then maybe we could break this cycle. Most depressed people overblow the negatives and they underappreciate the positives.

CBT-trained psychologists teach clients to take credit for some of the positivity and try to negativity slide. By doing this psychologists can break the cycle.

CBT often can take a while to work. Someone has to learn to think of their cognitive state in a different way. So they have to be trained and that training can take a while. But when somebody successfully learns how to rethink things they can have a long-term way of dealing with things like depression without the need for drugs or anything.