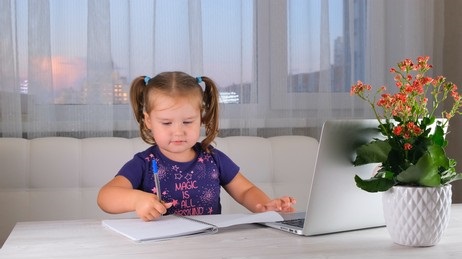 How Do Children Learn Their First Language?

For this to work, parents would have to respond to every detail in a child’s speech. Some believe that imitation plays a role in the learning of words.  When a mother says water then the child tries to repeat the word.

The child repeats the behavior of the parents. But young children constantly utter sentences that they have never heard an adult say, such as ‘All gone water.’ Even when children in the two-word stage of language development try to imitate longer sentences. For example, ‘John will go there, they produce their usual telegraphic utterances (‘John go’).

How Does A Child Learn Second Language?

In today’s world, many individuals learn a second language later in life. In fact, many of the students reading this textbook are not native speakers of English. Even though adults initially learn quickly because they can be taught the rules of a language, they are ultimately at a disadvantage.

We learn to discriminate of our own language by the end of the first year of life. As a result, “it is difficult to acquire the sound system of second language years of learning a second language, young children are more likely than adults to speak it without an accent, and they are better able to understand the language when it is spoken in noisy conditions.

Furthermore, when adults learn a second language, they typically retain an accent that they can never unlearn no matter how many years they speak the new language.

Biological factors account for the complexity of human language development. Psychologists argued that humans have an innate or ‘native’ biological capacity to learn the language. The human brain is equipped at birth with a language acquisition device (LAD), that facilitates language learning.

The fact that all children, regardless of their culture and language, seem to go through the same sequence of language development, is consistent with this View.

What is the Role of Environment in language learning?

The environment is critical for language acquisition.  A famous case of social isolation in childhood is that of a girl named Genie. Her father was psychotic and whose mother was blind dependent.

From birth until to age of 11years, Genie was strapped to a potty chair in an isolated room of her parents’ home. Before she was discovered, Genie had had almost no contact with other people.

She had virtually no language ability. Efforts to teach her to speak had limited results. She was able to learn words, but she could not master the rules of grammar that come naturally to younger Children.

How Does A Child Learn His Mother Tongue?

Recent theories of language acquisition state that both biological factors, as well as learning, play a role in the development of language. Rather than assuming that humans are simply pre-wired for language, such theories assume that the neural circuitry required for language processing emerges gradually in response to specific experiences.

The specific learning experiences needed are social interactions involving communication through language. In other words, mere exposure to language is not enough to acquire it; we need a supportive environment as well.

How is language learned?

At age one year, the child speaks a few isolated words; at about age two, the child speaks two- and three-word sentences; at age three, sentences become more grammatical; and at age four, the child’s speech sounds much like that of an adult. Because cultures differ markedly in the opportunities they provide for children to learn from adults.

In some cultures, parents are constantly speaking to their children, whereas in others parents verbally ignore their children the fact that this sequence is so consistent across cultures means that we are biologically prepared to learn the language.

How Does A Deaf Child Acquire Language?

Indeed, our innate knowledge of language seems to be so rich that children can go through the normal course of language acquisition even when there are no language users around them to serve as models or teachers.

A group of researchers studied six deaf children of hearing parents who had decided not to have learned their children learn sign language. Before the children received any instruction in lip reading and vocalization, they began to use a system of gestures called a home sign.

Initially, their home sign was a kind of simple pantomime, but eventually, it took on the properties of a language. For example, it was organized at both the morphemic and syntactic levels, including individual signs and combinations of signs.

In addition, these deaf children (who essentially created their own language) went through the same stages of development as normal-hearing children, The deaf children initially gestured one sign at a time and later put their pantomimes together into two- and three-concept ‘sentences.

These striking results attest to the richness and detail of our innate knowledge. These results were consistent with the nativist view are findings showing that language learning has critical periods during which it must be acquired.

This is particularly evident when it comes to acquiring the sound system of a new language learning new phonemes and the rules for combining them.

We have already noted that infants less than one year old can discriminate among phonemes of any language but lose this ability by the end of their first year, so the first months of life are a critical period for homing in on the phonemes of one’s native language. This is relevant for second-language learning, discussed below.

Human child programmed to learn the language but they need several years to learn the rules for combining them. When children begin to speak, they first learn words that name concepts that are familiar in their environment. Then they move on to sentences.