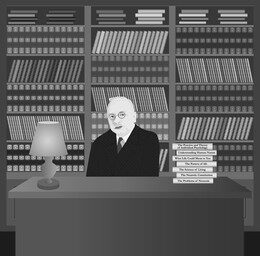 Alfred Adler was born in Vienna in 1870 to a middle-class family and died in Aberdeen, Scotland, in 1937 while he was on a lecture tour. He received a medical degree in 1895 from the University of Vienna. At first, he specialized in Opthalmology, and then, after a period of practice in general medicine. he became a psychiatrist.

He was one of the charter members of the Vienna Psychoanalytic Society and later its president. However, Adler soon began to ideas that were at variance with those of Freud and others in the Vienna Society and when these differences became acute.

During World War Adler served as a physician in the Austrian army. After the war, he became interested in child guidance and established the first guidance clinics in connection with the Viennese school system. He also inspired the establishment of an experimental school in Vienna that applied his theories of education.

In 1935 Adler settled in the United States, where he continued his practice as a psychiatrist and served as Professor of Medical Psychology at the Long Island College of Medicine. Adler was a prolific writer and an indefatigable lecturer.

According to Adler humans are motivated by their expectations of the future than by the experience of the past. If a person believes that there is a heaven for virtuous people and hell for sinners, this belief will exercise influence on his conduct.

These fictional goals were subjective causation of psychological events. Individual psychology insists absolutely on the finalist for the understanding of all psychological phenomena.

The final goal is a fiction, that is impossible to realize but that nonetheless is a very spur to human striving and the ultimate explanation of conduct.

Adler’s personal history provides a clear example of the strong to overcome inferiority, which became the central theme in his theory. As a boy, he was weak, clumsy, unattractive, and initially a poor student.

He was run over by carriages on several occasions, and he developed rickets and pneumonia. Adler recognized that his own success in compensating for these deficiencies served as a model for his theory of personality.

Alfred Adler’s major contribution to personality theory is his concept of the creative self.  Adler’s self is a highly personalized, subjective system that interprets and makes meaningful experiences for the organism.

Moreover, it searches for experiences that will aid in fulfilling the person s unique style of life; if these experiences are not to be the self tries to create them. Adler’s contribution to this new trend of recognizing the self as an important cause of the behavior is very significant.

What is Alfred Adler Theory?

Adler considered each person to be a unique configuration of motives, traits, interests, and values; every act performed by the person bears the stamp of his or her own distinctive style of life.

Adler’s theory of the person minimized the sexual instinct that in Freud’s early theorizing had played an almost exclusive role in the dynamics of behavior. They are motivated by social and not by sexual interest.

Psychosocial theory developed by Erik Erikson also explains challenges faced by individuals throughout his life. Their inferiorities are not limited to the sexual domain but may extend to all facets of being, both physical and psychological.

What is the basic principle of Adlerian theory?

They strive to develop a unique style of life in which sexual drive plays a minor role. Finally, Adler considered consciousness to be the center of personality. This alone makes him a pioneer in the development of ego-oriented psychology.

What is personality according to Alfred Adler?

Style of life is the basic principle in Adler’s personality theory. It is the principle that explains the uniqueness of a person. everyone has a style of life, but no two people develop the same style. Every person has the same goal of superiority, but there are many ways of achieving this goal.

One person tries to become superior through developing the intellect, while another bends all his effort to achieving muscular perfection. All of a person’s behavior springs from his style of life. The style of life determines how a person confronts the three life problems of adulthood, they are social relation, occupation, and love & marriage.

What is Alfred Adler famous for?

He published a hundred books and articles during his lifetime. The practice and theory of individual psychology (1927) is probably the best introduction to Adler’s theory of personality.

Shorter digests of Adler’s views appear in the Psychologies of 1930 and in the International Journal of individual Psychology (1935). In addition, four book-length biographies of Adler have been published.

In sharp contrast to Sigmund Freud’s major assumption that human behavior is motivated by inborn instincts and carl Jung’s principal axiom that human conduct is governed by inborn archetypes, Adler assumed that humans are motivated Primarily by social urges.

Humans are, inherently social themselves to other people, engage in cooperative social activities, place social welfare above selfish interest, and acquire a style or life that is predominantly social in orientation.

Adler did not say that humans become socialized merely by being exposed to social processes. Social interest is inborn, but the specific types of relationships with people and social institutions that develop are determined by the nature of the society into which a person is born.

In one sense, then, Adler is just as biological in his viewpoint as are Freud and Jung. All three assume that a person has an inherent nature that shapes his or her personality. Freud emphasized sex, Jung emphasized primordial thought patterns, and Adler stressed social interest.

It is difficult to overemphasize this distinction between Adler and Freud. Freud starts with the assumption that by nature man only wants to satisfy his drives the pleasure principle and must, therefore, from the viewpoint of culture be regarded as completely bad. In contrast, Adler believed the indestructible destiny of the human species is social interest”.