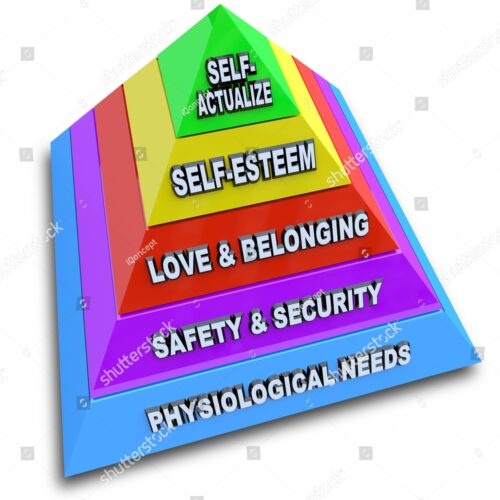 Abraham Maslow supplied the brighter picture of psychology, hierarchy Maslow proposed a theory of human motivation based on the hierarchy of needs. He conducted an investigation on healthy and creative persons to arrive at certain personality theories. Maslow interviewed thousands of people and finally come up with the hierarchy of needs.

In the year 1951, Maslow went to Brandeis University and became a resident fellow of the Laughlin foundation. He brought third force, Humanistic psychology in American psychology, the other two being behaviorism and psychoanalysis. Maslow suffered a fatal heart attack on June 8, 1970, and died.

Abraham Maslow wrote that all pieces of the evidence whether clinical or research indicate that every human being, even a newborn baby, all have an active will toward health, an impulse toward growth, or toward self-actualization of human potentialities.

He proposed a pyramid of needs. The whole pyramid is divided into levels and each level has different needs. The need of the lower level is dominant, in other words when several needs are active, the lowest need will be the most compelling. As the lower level is satisfied, new and higher needs/levels emerge.

Maslow proposed a five-tier model of human needs. These needs motivate human behavior. These are as follows

The lowest level in Hierarchy Maslow is the physiological needs. This includes hunger, sex, and thrust. These needs dominate the person and push all other needs into the background. As physiological needs are fulfilled, higher needs will emerge. These also include clothing, shelter, and good health.

As we saw around us every person tries to satisfy hunger, thrust, and sex drive first. All other priority remains after these needs. Everyone works hard to earn money so that he or she gets food.

The next set of needs to emerge is safety needs. These include security, stability, dependency, freedom from fear, protection, etc. These needs are common in infants and children. As a young child fear of strangers. The safety needs are largely stratified in adults living in societies. The deficits of needs are seen only during natural disasters.

During the ISIS attack in Syria, every citizen in Syria feels the deficit of safety needs. They worried about their lives since there was no protection of life. They somehow manage food b, so physiological needs are satisfied but safety needs remain unsatisfied.

The third set of needs to emerge is belongingness and love needs. These represent the need for friends, family, and love partners. Maslow compared these needs with animals. Like animals flock, make a herd, remain in groups, we humans also like to become a member of the group.

Everyone in our society is connected with some group, whether it will be a community, sports, education, and welfare. We want to make friends, share our ideas with them, and accept their views. Even a young child makes friends love to play with them. According to psychologist Erik Erikson, a person who is unable to make a relationship will face conflict Intimacy versus Isolation later in their life.

The fourth level need includes two sets of esteem needs. One is our need for self-esteem and the other is a requirement of esteem from others. The first includes desires for strength, achievement, mastery, competence, and independence. The second set includes the need for respect, fame in society, status, dominance, attention, and dignity.

It is generally found a leader in politics belongs to an affluent family. His lower needs are satisfied and now he wants fame and power, so he join politics for strength and achievement.

The highest level of needs is self-actualization. Maslow stated that when all four of the basic, deficiency needs have been satisfied, a new restlessness will soon develop. The desire of doing everything whatever an individual can do. In simple words ‘what a man can be, he must be’.

Famous scientists and researchers fall into this category. These people focused on problems, accept reality and put their maximum efforts into any country or community.

What is the importance of hierarchy Maslow today?

Maslow made a number of assumptions regarding the nature of humans. He proposed people have an inborn nature that is essentially good or at least neutral. it is not inherently evil. When humans are miserable, it is because the environment has made them so through ignorance.

Person-centered counseling is influenced by hierarchy Maslow and this approach stressed the client’s capability and responsibility to identify ways to more accurately identify and cope with reality.