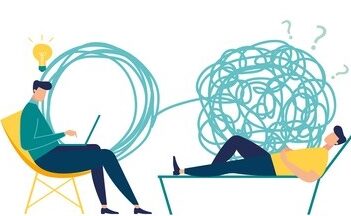 So, we can’t say surely which theory is correct and which is wrong. Austrian psychologist Sigmund Freud theory of psychoanalysis brought a revolution in the field of psychology. He explained the component of personality with emphasis on the unconscious mind.

What is Sigmund Freud’s Therory?

According to Sigmund Freud, personality is made up of three major systems: the id, the ego, and the superego. Each system has its own functions, properties, components, operating principles, dynamisms, and mechanisms.

They interact closely with one another, human Behaviour is nearly always the product of an interaction among these three systems. All three systems are connected with each other.

What are the key concepts of psychoanalysis theory?

The id, ego and superego are key concepts of the psychoanalytic theory according to Sigmund Freud. The id is the basic and native system of the personality. Ego and the superego become differentiated from Id.

The id consists of everything psychological and reservoir of psychic energy and furnishes all the power for the operation of the other two systems. Freud called Id the psychic reality.

The ID according to Psychoanalysis

The Id reduces its tension by applying a principle called the pleasure principle. Id main aim is to avoid pain and only obtain pleasure. Like sneezing and blinking; they usually reduce tension immediately.

The Id also fulfils wish by making pictures like the nocturnal dream, which Freud believed always represents the fulfilment or attempted fulfilment of a wish. These wish-fulfilling mental images are the only reality that the id knows.

The Ego according to Psychoanalysis

By Id, a person is not capable to reduce tension, a hungry person cannot eat with only mental images, so a new system comes into existence because the needs of the organism require transactions with the outside world.

The hungry person has to seek, find, and eat food before the tension of hunger can be eliminated. This means that the person has to learn to differentiate between a memory image of food and actual perception of food as it exists in the outer world.

The person matches the memory image of food visit the sight or smell of food as they come to the person through the lenses. The basic distinction between the id and the ego is that the id knows only the subjective reality of the mind whereas the ego distinguishes between things in the mind and things in the external world.

The ego has control over all the cognitive and intellectual functions. The ego controls the gateways to actions, that’s why it is called the executive of the personality. It selects the features of the environment to which it will respond and decides which need will be satisfied and in what manner.

In performing these highly important executive functions, the ego has to try to integrate the conflicting demands of the id, the superego and the external world. This is not an easy task and often places a great strain on the ego.

The ego is the portion of the id, that comes into existence in order to forward the aims of the id and not to frustrate them. It derives all of its power is derived from the id.

It has no existence apart from the id, and it never becomes completely independent of the id. Its principal role is to mediate between the primitive requirements of the organism and the conditions of the surrounding environment.

The Superego according to Psychoanalysis

The third system of personality is the superego, which judges whether action is right or wrong. The superego is the moral arm of personality. It includes ideas of society, moral values and the image of a morally ideal person. These values we learn from our parents and society.

The superego performs the following functions in personality.

(l) It inhibits the impulses of the id, particularly those of a sexual or aggressive nature since these are the expression of the impulse that is most highly condemned by society.

(2) It persuades the ego to substitute moralistic goals for realistic ones.

These three systems are merely names for various psychological processes that obey different system principles. Under ordinary circumstances, these different principles do not collide with one another.

These three systems work together as a team and the administrative captain of the team is ego. Human personality is a unit and normally functions as a whole. It is not working as three separate segments.

Energy source of Id, Ego, and Superego according to Psychoanalysis?

The human organism has a complex energy system that derives its energy from food.  It consumes and expends its limited pool of energy for various purposes such as circulation, respiration, muscular exercise, perceiving, thinking, and remembering.

The process of thinking also needs energy. Sigmund Freud called this form of energy psychic energy. If the Id retains control over a large share of the energy, the behaviour of the person will tend to be childish and primitive.

If the superego gains control of energy, the functioning of personality will be dominated by moralistic consideration.

How does personality develop as per Psychoanalysis?

To develop personality a response is required for the following tensions:

These sources increase tension and as a result, a person is compelled to learn new ways of reducing tension. He /she learn new methods and this learning is called personality development.

Freud was probably the first psychological theorist to emphasize the developmental aspects of personality and in particular to stress the role of the early years in laying down the basic character structure of the person.

The ego has “three harsh masters”: the id, external reality, and the superego. Our behaviour always results from the interaction of all these three systems